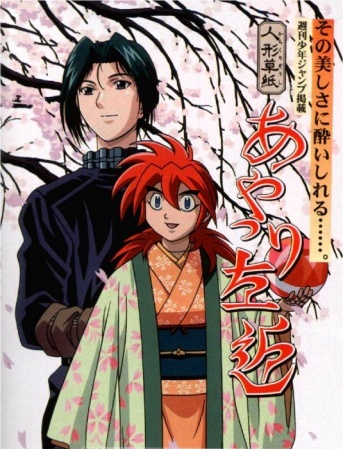 "The masters of puppets are the masters of humans. Ventriloquism is also mind-reading. Not only the voice itself is mimicked, but the voice of the soul as well."
Advertisement:

Karakurizoushi Ayatsuri Sakon (""Doll Puppeteer Sakon") is a shonen manga written by Masaru Miyazaki and illustrated by Takeshi Obata, serialized in Weekly Shonen Jump from 1995 to 1996. It received a 26-episode anime adaptation that aired from 1999 to 2000.

Sakon is the grandson of the famous Bunraku master, Tachibana Zaemon. He is incredibly shy and lacks confidence in himself. However, when he is with his puppet, Ukon, he is able to focus himself and his crime-solving abilities. As a contrast to traditional Bunraku puppeteering, Sakon is an expert ventriloquist.

Ukon is a beautiful red-haired Bunraku puppet created in 1870, supposedly by the Master puppet-builder Unosuke Koizumi III. But Ukon doesn't act as a good Bunraku puppet should. When he is with Sakon, he is loud-mouthed, obnoxious, flirtatious, coarse, and very egocentric. Together, Sakon and Ukon travel around Japan, solving mysteries, murders, and horrific crimes. In the meantime, Sakon's aunt Kaoruko, a young and pretty police detective, helps him out and keeps an eye on him.