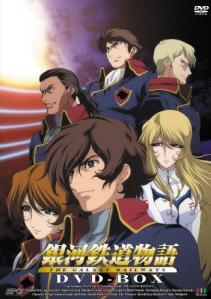 The Galaxy Railways is a science-fiction anime about railways extending beyond planets' surfaces and into space. With the advent of interplanetary travel through these trains, humanity formed the Space Defense Force (or SDF for short) as a way to protect passengers from terrorists, aliens and hazardous asteroids.

Manabu Yuuki is one of the youngest members of the SDF, enlisting after the deaths of his father and brother, both sacrificing themselves in the name of duty. Manabu is assigned to Sirius Platoon which include Louise Fort Drake, the only human female in Sirius Platoon; Schwanhelt Bulge, the captain of Big One, which happens to be Sirius Platoon's train; Bruce J Speed, a hot-headed serviceman who detests Manabu; David Young, the easy-going opposite, and friend, of Bruce; and Yuki Sexaroid, an android nurse.

What you get is an intense episodic anime from the mind of Leiji Matsumoto. The show contains plenty of sad, heroic moments, a heartwarming sense of companionship between it's cast, and complex themes dealing with life or death situations. Also included are deeper themes of destiny and accepting your own fate.

The 26 episode TV series is available in an English dub by Funimation. There are 4 OVA episodes collectively known as "A Letter from an Abandoned Planet", and a second series entitled "Crossroads to Eternity", with 24 episodes in total. However, the OVAs and second TV series have not been licensed in English.

Not to be confused with its spiritual predecessor, Galaxy Express 999 (although the OVA forms a Crossover with it), or Leiji Matsumoto's source of inspiration for both series, Night on the Galactic Railroad.