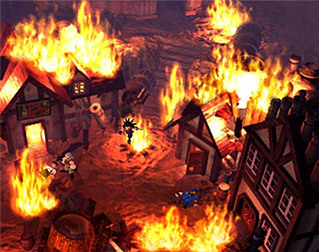 Now where is the convenient survivor of this flashback?
"It starts, as all historical epics must now do, with a hideous massacre seen from the point of view of a terrified child."
— Mark Kermode, reviewing Pompeii
Advertisement:

The town the hero first appears in is often his hometown. There is a very high chance said town will be demolished by evil forces, prompting him to go on his quest, although sometimes the town is inaccessible for other reasons (banishment, for example).

This is not strictly limited to hometowns. It's almost guaranteed that wherever the hero starts out — be it town, planet or even universe, depending on the scope of the story — is likely to be rudely destroyed by the forces of fate as soon as his back is turned.

Frequently paired with Refusal of the Call, since The Call Knows Where You Live, and often the reason You Can't Go Home Again after Easing into the Adventure. Often results in the hero watching the town burn, emotionally overcome at having their source of joy destroyed. Rarely, the Final Boss may take place in the very same town.

One of the worst examples of this trope, reserved for the most heartless of villains, is for when they are eventually confronted for it by the hero, and they don't even remember doing it.

Note that this trope does not include stories in which survival (within the town) during disaster or war, and its aftermath, are the main focus. The key aspect of this trope is not that the town is destroyed, but that the destruction of (or banishment from) the hero's old home becomes an impetus to the later adventures.

See also Where I Was Born and Razed, when the character is the doom of their own hometown.

Not to be confused with Domed Hometown, although these are easier to doom, or Forced from Their Home. See also Sugar Apocalypse.