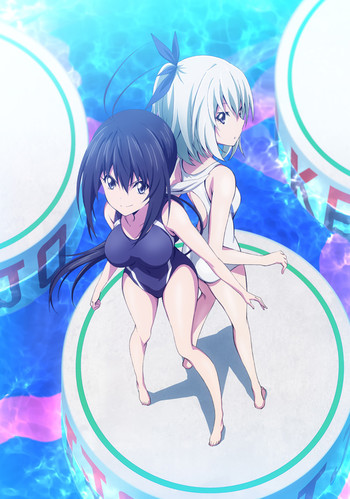 Keijo!!!!!!!! is an Ecchi sports manga series written and illustrated by Daichi Sorayomi and serialized in Weekly Shonen Sunday from 2013 to 2017, with an anime adaptation directed by Hideya Takahashi and aired by Xebec as part of the Fall 2016 Anime season.

Keijo is a new sport whose popularity is sweeping the world. The premise is simple: a number of female competitors stand on a platform floating on a swimming pool, and must attempt to knock each off until only one remains standing. The catch is they are only allowed to make contact using their breasts or butt. As silly as it sounds, the sport rakes in a fortune for players, so it is taken very seriously. Into this world comes Nozomi Kaminashi, a seventeen-year-old gymnastics prodigy who shocks her friends and family by turning down a number of college scholarships in favour of taking up Keijo and making as much money as possible, as fast as possible.

The anime received a lot of buzz, including a worldwide simulcast

on Crunchyroll and an English broadcast dub

by Funimation. After the anime aired, Sorayomi had to speed up the story so that it would conclude in April 2017

, with a total of 177 chapters (across eighteen volumes). Contrary to initial reports

which later turned out to be incorrect, this was not because of poor sales of the anime, which actually did reasonably well.

Muromachi and Morimoto proceed to parody this trope.

Muromachi and Morimoto proceed to parody this trope.