Manga / Keep Your Hands Off Eizouken! 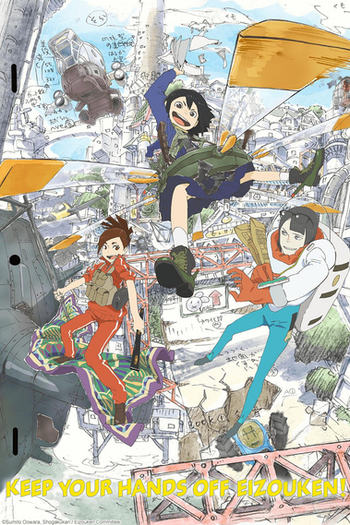 This is the ultimate world!Characters  Clockwise, starting from top: Asakusa, Kanamori, Mizusaki
"I forgot that they're in their own world, too."
— Sowande Sakaki referring to the titular club
Advertisement:

At a young age, Midori Asakusa became fascinated not just with anime but also with how it was made. Now a first-year high-schooler, she dreams of creating an anime with a setting based on the unusual "dungeon-like" campus of Shibahama High School. Still, she hasn't taken the first step to creating anime, insisting that it's impossible to do it alone.

When attending a screening by her school's anime club, she and her longtime friend, the money-minded schemer Sayaka Kanamori, encounter Tsubame Mizusaki, a rich and famous fashion model who also happens to be a classmate of theirs. While fleeing from a handler who is trying to prevent Mizusaki from joining the anime club on orders from her Fantasy-Forbidding Father, Asakusa and Kanamori learn that Mizusaki wants to become an animator. With Asakusa & Mizusaki finding a common interest and Kanamori seeing an opportunity to rake in some cash, the trio team up to create an animation club to make their "ultimate world" a reality!

Keep Your Hands Off Eizouken! (映像研には手を出すな！, Eizouken ni wa Te o Dasu na!, lit. "Don't Mess with the Motion Picture Club!") is an ongoing manga by Sumito Ōwara that begun serializing in the Seinen manga magazine Monthly Big Comic Spirits in 2016. A 12-Episode Anime television series adaptation by Science SARU* with production assistance by Dr Movie, CloverWorks and T2 Studio ran from January 5th, 2020 to March 22nd, 2020. The series is directed and written by Masaaki Yuasa, with Naoyuki Asano providing character designs and Oorutaichi composing the music; it notably marks Yuasa's first foray into an animated series (as opposed to his usual portfolio of feature films) since DEVILMAN crybaby in 2018 and the first television series produced under his directorship since Ping Pong in 2014. It was also the last television series produced under Yuasa's directorship— and the last of his projects to be released— prior to amicably leaving Science SARU just three days after the final episode aired. It is not, however, his final project with the studio period: that position goes to the film Inu-Oh, due for release in 2021.

The series is currently being simulcast on Crunchyroll.

Compare to Shirobako, a more idealistic take on a group of friends wanting to make an anime together (while still further exploring how the industry works), and Girlish Number, another series about anime production with a far more cynical edge to it.

Example of:
Not So Stoic