Characters / Keep Your Hands Off Eizouken! 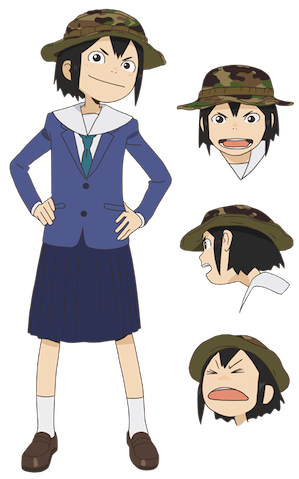 Voiced by: Sairi Ito
Portrayed by: Asuka Saitō
An aspiring artist and wannabe animator, being especially interested in setting and background design. Having first discovered her love of anime as a little kid, Asakusa dreams of making an anime based on her school, creating the Motion Picture Club with her friends Kanamori and Mizusaki to do so. She serves as director for the club's projects.

Voiced by: Mutsumi Tamura
Portrayed by: Minami Umezawa
Midori Asakusa's friend. While not being an anime fan, she helps the Motion Picture club on the grounds that she expects money and getting back her "investments" from Asakusa and Mizusaki. She serves as producer for the club's projects.
Tsubame Mizusaki 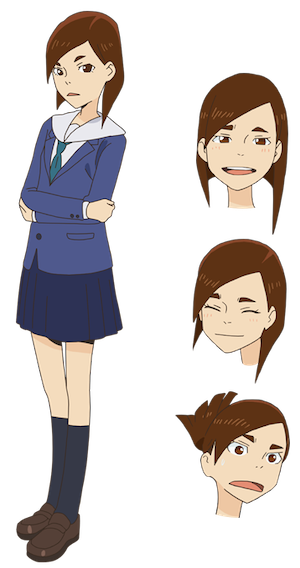 Voiced by: Misato Matsuoka
Portrayed by: Mizuki Yamashita
A teen fashion model and the daughter of wealthy actors. Initially denied from joining the anime club by her parents' order, she befriends Asakusa and Kanamori and joins the Motion Picture Club, eager to help with her skills at figure drawing and character design. She serves as the club's lead animator. 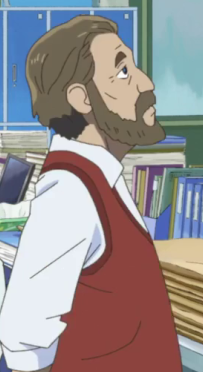 Voiced by: Kazuhiko Inoue
A mellow and spaced out teacher who becomes Eizouken's supervisor.
Sowande Sakaki 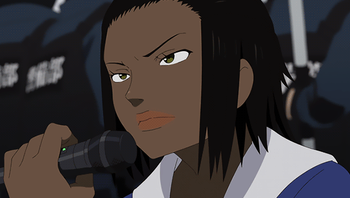 Voiced by: Mikako Komatsu
Portrayed by: Ema Grace
The student council’s secretary. She is better at seeing through the essence of things than the president Toru Dotonburi and is considered as the power broker of the council. 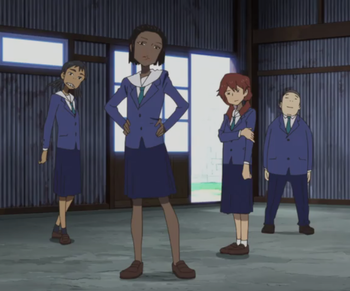 The elite four who manage the affairs of the student body and delegate the actions and status of every club that has been, or ever will be, created. 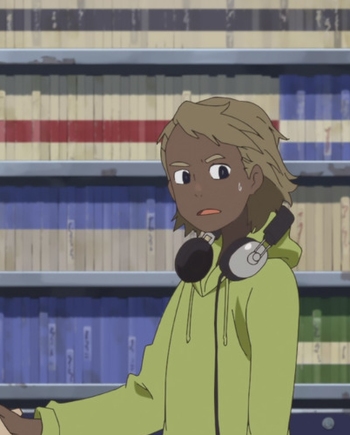 Voiced by: Yumiri Hanamori
Portrayed by: Hiyori Sakurada
The president, and only member, of the Sound Effects Club, known for being a huge anorak about sound design. After some intense negotiations with Kanamori, she becomes Eizouken's official sound adviser.
The Robot Club 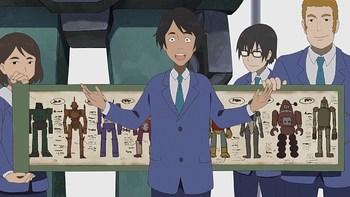 From left to right:Okamoto, Nakamura, and Kubo
Voiced by: Reiko Takagi (Okamoto), Yusuke Tezuka (Nakamura), Michiyo Murase (Kubo)
An oddball club that specializes in painting. While Eizouken hires them to create backgrounds for their upcoming anime, some of the club members give the girls a hard time because of their artistic differences. 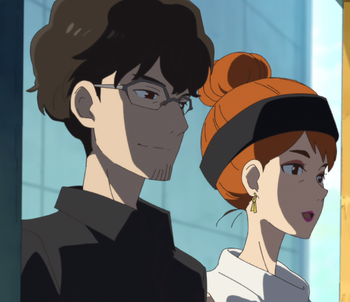 Voiced by: Satoshi Mikami (Dad), Noriko Hidaka (Mom)
Tsubame Mizusaki's mom and dad. A pair of influential actors who have had a huge hand in directing their daughter's modeling career.
Kashima 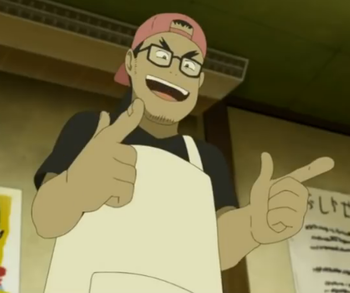 Voiced by: Kazuya Yazaki
A friendly young man who works at a fruit-ramen shop and is a huge fan of Eizouken's anime projects.