Manga / Kaze to Ki no Uta 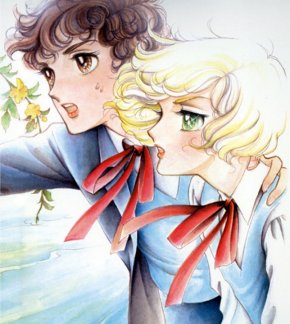 "Gilbert Cocteau, you were the greatest flower to ever bloom in my life. In the faraway dreams of youth, you were a bright red flame, blazing so fiercely...You were the wind that stirred my branches. Can you hear the poem of the wind and trees? Can you hear the tumult of our youth? Oh, there must be others who do remember their own days of youth...."
Advertisement:

It is 1880 at Lacombrade Academy, an all-boys' boarding school in France. Serge Battour is a cheerful and kind new student who is trying to fit in with the rest of the student body, despite the taboo of his Gypsy heritage, made obvious by his dark skin. However, his roommate Gilbert Cocteau—who will sleep with anyone if he can manipulate them to his advantage by doing so—is not helping the situation, especially when he makes it his personal goal to bring about Serge's downfall. The two boys may destroy each other or come closer together.

Kaze to Ki no Uta, meaning The Poem of Wind and Trees in Japanese, is a manga series by Keiko Takemiya that was serialized from 1976 to 1984 (starting its run in Shoujo Comic, but later moving to Petit Flower in 1981 where it continued until its conclusion). It was one of the first shoujo manga to focus on a homosexual relationship between boys and the first to have sex play a major role in the story; Takemiya, along with her roommate and fellow mangaka, Moto Hagio, is credited with kickstarting the shounen-ai genre (Takemiya's earlier work, In the Sunroom was the first manga to have shounen-ai elements). The series, though controversial, was able to win the prestigious Shogakukan Manga Award for shojo in 1979, as well as now being regarded as a classic.

The series was also adapted into a 60-minute OVA in 1987 that more or less summed up the first three volumes of the series, as well as revealing what happens at the end. The OVA was targeted towards those who have already read the manga, being quite fast-paced and skipping some story arcs.

This is a great series for those seeking a more unique take on the male/male genre, interesting characters, and endearing storyline. And when watching or reading, be sure to have some tissues ready.

Kaze to Ki no Uta provides examples of: