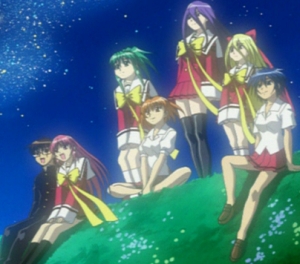 Tetsuro Tanaka finds out he's been accepted to a new school. A girls' school, and he's the lone male there. Within a day of his arrival, he's treated to the Alpha Bitch Student Council President and her Girl Posse, and gets himself a Magical Girlfriend, Yayoi Asuka, who shares the name of his childhood friend. He finds himself staying in Yayoi's dorm along with her five friends. Something's not quite right about them. They're all cyborgs, and together they form the Koi Koi 7. Which only has six members. Tetsuro learns about each of the girls he lives with, and they in turn defend him (and Yayoi) from Miya's almost daily attacks.

What starts off like a typical Unwanted Harem turns into a story of conspiracies, things given up and things that want to be regained - a foreshadowed yet powerful Genre Shift. The manga, by Morishige (creator of Hanaukyō Maid Team) ran for 9 volumes, and was adapted into a considerably different anime that nonetheless retains the quirkiness of its source.