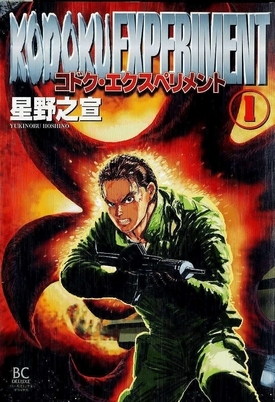 Kodoku Experiment is a sci-fi manga written and illustrated by Yukinobu Hoshino, of 2001 Nights fame.

Deronga Five Alpha is a dying unstable planet which, according to studies, used to be a very lush planet with all kinds of different species. The current state of the planet is a horrifying place where vicious carnivorous creatures fight in the “survival of the fittest.” Captain Camilla Bagures, the leader of the research spacecraft, is a cold and cruel woman who, despite the warnings, unnecessarily sends a military team down to the planet for research. The end result was a catastrophe with the team being slaughtered by the creatures on the planet. The leader of the team, Cannon, vows vengeance on Bagures before seemingly dying.

Jump to 20 years later, a spaceship comes near Deronga Five Alpha to see the end of the planet. As the planet explodes, a foreign object attaches itself onto the spaceship. As nothing can survive a planetary explosion, the crew investigates the object only to find out it is one of the creatures from the planet Deronga. As the story progresses, the creature goes into a rage after seeing Bagures, now an extremely important person in the military, on the monitor screen. Could this creature be Cannon? And how do you stop something that can withstand a planetary explosion?