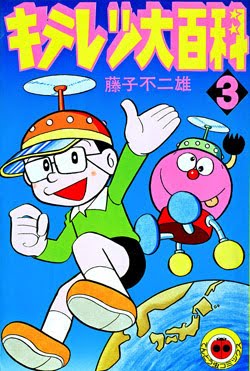 Doraemon and Nobita with their personalities flipped.
Advertisement:

Kiteretsu Daihyakka is a Science Fiction manga created by Fujiko Fujio in 1974. Adopting the same basic formula set by Doraemon, the child-friendly manga continued until 1977, after which it was adapted into an anime by Studio Gallop in 1988. Broadcast for a total of eight years on Fuji TV, the anime expanded the original storyline considerably, developing an extended romance arc as the principal characters matured. The cartoon finished up on June 9, 1996, having completed 331 episodes and one TV special.

The series' premise recycled elements of several earlier Fujio projects, particularly the young everyman hero with a Robot Buddy. In Kiteretsu Daihyakka, however, the personalities of the two main leads were swapped, with the human boy being a child prodigy and the robot being bumbling.

At the outset of the story, young Eiichi Kite has been experimenting with various ingenious devices, all of which cause massive property damage when activated. Frustrated to the point of surrender, Eiichi takes heart when he learns that one of his ancestors was the Japanese Da Vinci (ie a brilliant engineer who constructed flying machines during the Edo period).