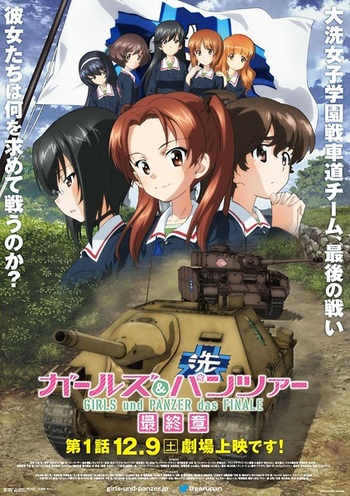 This is the finale about girls and their panzers. What else did you expect?
Advertisement:

Almost a year has passed since the 63rd National High School Sensha-dō Tournament, and everything has been well for Oarai ever since their victory over the University Team. Everything with school has been going fine with the girls... but there's only one problem: Momo hasn't been accepted into any universities for her graduation due to being too busy with finding new tanks for the Winter Cup with the intention of making Oarai famous, which likewise prevents any future attempts to close the school. Determined to help Momo graduate into the same university as Anzu and Yuzu, the Oarai team are determined to show that Momo is indeed skilled in Sensha-do, establishing this by making her their commander during the Winter Cup tournament.

If you are looking for tropes from the original television show, click here. For the "Der Film" movie, click here.