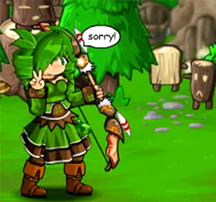 The fourth game has the new heroine, Anna, tracking down the 3 party members after her village was ransacked of many things, most importantly a jewel kept there. Anna starts the quest looking for the rest of the party to try and get the jewel back, but when it turns out to be missing, she drags the team along to find it.

Buy the full version of the game at Steam here

. You can also play the free version on Newgrounds here