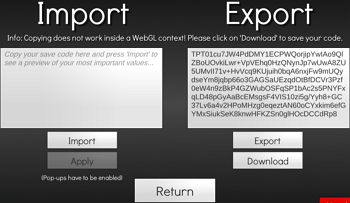 See that export box? It may not even be one twentieth of the save file.
Advertisement:

As save data became almost omnipresent, Password Save started becoming obsolete by the late 1990s and pretty much extinct by the 2010s. However, the idea of saving the game in text was still interesting, especially in the cases of games that could be easily transferred by copy-paste (almost always on computers) and lack cloud save functionality. Due to modern games having a lot more variables than old-school games with typically higher values as well, a solution has been developed with the export save.

An export save is a save file which is usually so absurdly long that just typing it in would be impractical. Instead, you're supposed to copy the text into a .txt file with an "Export" function and then paste it into a window with an "Import" function. Alternatively, you have to download the file directly from a game in .txt (or occasionally in a different extension) and then import it directly from the file manager.

Most files are obfuscated or encrypted in order to prevent people from figuring them out or making code generators (not that it stopped this). Additionally, if someone shares a 100% code, the game can effectively beaten by everyone with a simple copy-paste, which is even easier than typing in a password for the last level. Used fairly, it can be a nice and easy way to backup your savefile.

Another helpful use for an exportable save file is players being able to help the developers with fixing a Game-Breaking Bug like a NaN error by providing the circumstances in which it occurred. Some games do recommend doing so if that happens.

This trope is most commonly used in Idle Games but can be seldom seen elsewhere. By the way, most export saves end with "=" due to peculiarities of base64 encoding.