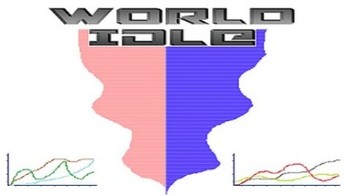 World Idle is an Idle Game created by Baldurans for Kongregate. It's a video game in which you manage a human population by giving them jobs, which then produce things like food, wood or tools. And later on, after exceeding 200000 people, your soldiers can go on a war against other places and take over them.

or on Kongregate here