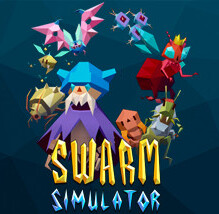 Swarm Simulator is a Simulation Idle Game created on August 28, 2014. Like the name suggests, the player controls a Horde of Alien Locusts that starts off with a few larvae and drones before growing into a massive insect empire filled with endless amounts of bugs using larvae and meat, and captured territory.

Swarm Simulator: Evolution, an Updated Re-release of the game was released on Kongregate. Co-developed by ScaryBee, it has some Microtransactions and a few new features added in.

, while Swarm Simulator: Evolution can be played on Kongregate here

. It's also available on Steam.