Video Game / Escape from the Underworld 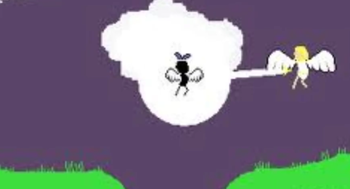 The inciting incident of the game. You are about to fall down a deep hole very soon.
A Metroidvania-style freeware platformer created for a 2010 indie game competition known as Indie Kombat. It was partly inspired by Spelunky, and game's readme file thanks its creator Derek Yu for making that game and sharing many important resources.
Advertisement:

This particular game starts off with the player playing a black-silhouetted angel slaughtering an entire village of people, attracting the ire of his fellow angels who descend on him. After a brief fight, the head angel appears and paralyzes the black angel, stripping him of his sword, his wings and all his health before dumping him in the underworld. The rest of the game revolves around the black angel regaining his former strength (and then some) to escape from the underworld and get revenge on the head angel.

A flash port of the game can be played here

This game is an example of: