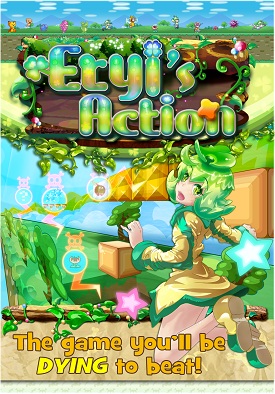 The key word here is "DYING"
WARNING! Contains traps that will annoy the heck out of you! The developers takes no responsibility for smashed controllers!
Advertisement:

Eryi's Action is a devilishly hard platformer by the doujin circle XTAL SWORD. It is the Spiritual Successor to Syobon Action.

The story of this game puts the player in the role of the titular heroine, Eryi, a fairy who wants to eat a savory melon she has been eagerly waiting for. Unfortunately, her desired melon has been stolen by a troll (in several senses of the word) named Farta, and Eryi sets out from her house to hunt down her precious melon.

In this game, your skills and wits will be tested as you go through many traps and hazards you won't see coming. And you will probably die. A lot. Thankfully death is just a slap on the wrist and you have limitless lives so you can try to avoid being killed by the elaborate traps again... and again... and again...

An English version of the game was released on DESURA on September 9th, 2012, by Nyu Media; and released via Steam Greenlight on November 9th, 2013. The English Web site for the game and the game's trial version can also be found here

Be warned, this game can be addicting, especially if you're a masochist.