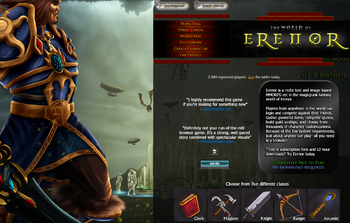 Erenor.com at its peak.
Advertisement:

Erenor: The Rise of the Sun King was a story-based Web Game set in the titular magicpunk fantasy world of Erenor. In this setting many of the standard fantasy tropes exist, but with a curiously larger level of technology; so while there are dragons, wizards, and clerics, there are also trains, airships, and lightbulbs.

While there are many storylines, the main one centers around a people called the Endran. Once the shining model of civilization, they've fallen into despair and chaos after the infiltration of a dark cult.

The official website launched in 2011, and lasted for several years, but ultimately shut down around 2015, leaving the domain parked ever since.