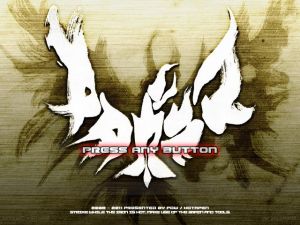 "Enough prattling! Let them come! We shall grind their bones to dust!"
Advertisement:

Yatagarasu is a 2D Japanese fighting game for PC, created by Circle Edge, a three-person team made up of former SNK talents including art director Styleos and designer Umezono. (The designers also worked on the Obvious Beta Psikyo game Daraku Tenshi: The Fallen Angels, with which this game shares aesthetic similarities.) The gameplay holds parallels to Street Fighter III: 3rd Strike, with a parry mechanic, user-selectable super moves, and similar pacing (up to and including characters sharing move sets with characters from said game). The character illustrations come from Styleos of Ibara and Mushihime Sama fame.

An interesting feature of this game are the selectable real-time color commentaries similar to the optional announcers in later Virtua Fighter games. The commentator voices are provided by well-know YouTube and Nico Nico Douga tournament personalities Tokido, KSK, and Kokujin.

The game was released in Japan on August 15th, 2009. NICALiS, the company behind the localization of Cave Story, is currently working on bringing Yatagarasu overseas on the Play Station Vita, PlayStation 4 and Xbox One under the title Legend of Raven - the project was originally planned for a release on Nintendo 3DS via the Nintendo eShop, but changed platforms due to fan demand. In mid-2013, Nyu Media ran an Indiegogo fundraiser

to pay for a sequel, Yatagarasu: Attack on Cataclysm. Among the new features in Attack on Cataclysm include three new characters, an English localization and English commentator voices from noted American tournament personalities Maximilian Christiansen, James Chen and UltraDavid. The fundraiser ended with the goal of $68,000 reached and surpassed with a final total of $118,243 raised against the main goal as well as fulfilling 4 of its stretch goals as well.