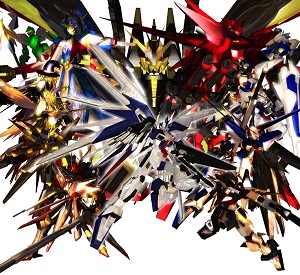 Is your operating system as mecha as this?
Ever wondered "Which computer operating system would win in a battle if they were Gundam-like mechas?". Look no further with than the Windom XP series by doujin circle Project Windom for PC!
Advertisement:

Initially named Bootfighter Windom XP SP-2, this series of games started as a Freeware Game based on the popularity of the Gundam Vs Series, initially featuring fourteen mechas based after Microsoft Windows and Linux operating systems with four game modes. The original game was fan translated by mirror moon and you can find it here

It was subsequently followed by a retail Mission-Pack Sequel titled Ultimate Knight Windom XP, which adds new mechs, a fairly difficult Arcade Mode, equippable items, general gameplay tweaks, and balancing to the roster. An Expansion Pack called Power-up Kit was later released during Comiket 77 that adds new stages (two stages from the original Bootfighter Windom XP SP-2 and one new area) and five new units. Ultimate Knight Windom XP was picked up for an official English release by Curious Factory on July 2nd, 2009 and it was released via Digital Distribution through their website

DRM-free, however it is outdated since it lacks the additions from the expansion pack and later updates. Thankfully there are fan-made translations for the expansion pack release of the game from a few forums dedicated to the game.

The Windom XP series owes its spotlight and life though to the spread of its translated freeware version, followed later by the spread of Ultimate Knight Windom XP and the popularization of its fan mods and videos.