Video Game / The War of Eustrath 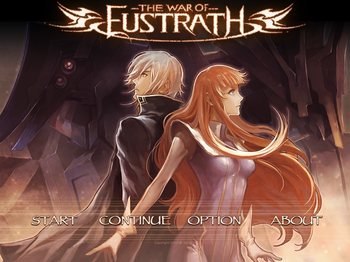 The War of Eustrath (sometimes known as "The War for Eustrath" or "Battle of Youstrass") is a Humongous Mecha Turn-Based Strategy game similar to Super Robot Wars, released in 2011 for the iPhone.
Advertisement:

The plot centers on Luke Bradferd, a knight fighting to free his conquered nation of Wefrad, and Tiana, a young country girl who is thrown into the conflict after her village is attacked by enemy forces. Luke and Tia, along with several allies, fight against the opposing force of Kradion using humongous mecha powered by elemental energy and known as GEARs.

The game has several characters, so a Character Sheet is being written.

The War of Eustrath contains examples of: