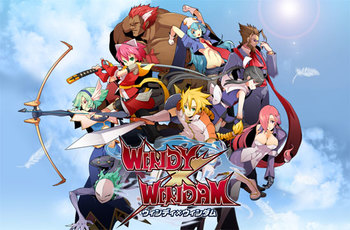 Windy X Windam is a Fighting Game from the same development team behind Izuna: Legend of the Unemployed Ninja, and including Izuna and Shino from that game.

It takes place on a remote island kingdom called Gawain, a place where people empowered with devices called "Windies" are given the ability to fly. Seven fighters, along with a mysterious "eighth" malefactor, have assembled for a tournament, wherein the winner will have his/her one greatest wish granted. Aside from the flight and special attacks granted by their devices, the fighters also have the ability to transform (for a very brief period of time) into a more powerful form.

The game was released in Japan in the summer of 2008 by Success, while it was given a very limited release in the U.S. by Graffiti Entertainment two years later, available only through online retailers.