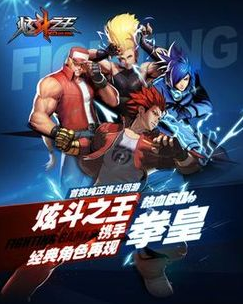 Xuan Dou Zhi Wang (loosely, The King of Dazzling Fights) is a 2D fighting game from Tencent Games and Jade Studios. It is currently available only in China as a free-to-play title similar to MMORPGs.
Advertisement:

The game (commonly abbreviated as XD) features combat that is closely related to The King of Fighters.

One difference between XD and KOF is the inclusion of two button throws, which is commonly seen as a staple of the Street Fighter series ever since Street Fighter Alpha 3. To perform a throw in XD, the player presses LP+HP simultaneously, or Back+LP+HP to perform a back throw, throwing his enemy behind him.

XD also bears a different visual style than KOF. Whereas the latter opts for hand-drawn sprites, XD instead uses 3D models that are captured and converted into sprite animations, similar to how games like Killer Instinct or Donkey Kong Country were made.

Xuan Dou Zhi Wang features an RPG-style leveling system that is mostly used for matchmaking. The more games you play, the higher your level is; even when you lose, you still gain experience. The game uses this to help match you with players of similar skill levels. The online component is also one of the most important features of the game, as the main design of the game is the MMO component.

Terry Bogard and Benimaru Nikaido will be added to the roster in a future update, making the aforementioned KOF comparisons come full circle.

If you want to visit the main site, hit up this link

. Be warned, though: the game is currently in a closed beta phase and securing access keys is at best a chore. You can view the entire cast here

(at the moment it's still growing so there will be new characters popping up from time to time).