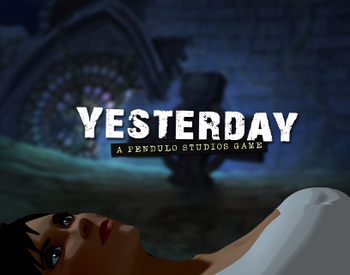 In New York City, homeless people seem to be vanishing left and right, only to be found immolated. Yet a strange "Y" shaped scar appears on seemingly unrelated people. The police are not giving much attention, so it is up to millionaire Henry White and his friend Cooper to begin to investigate these events. But that's only the start.

Years later, a man named John Yesterday wakes up from a failed suicide attempt with no memory and a Y-Shaped scar on his hand. What exactly did Henry White hire him for, and what is happening to the homeless people? Find out in this adventure game released for PC and phones.

A prequel/sequel (a sequel with prequel-parts in the form of flashbacks), Yesterday Origins, has since been released. Check it out here

Note: due to the game's story-heavy nature, even the names of the tropes themselves should be considered spoilers. As such, all spoilers are unmarked. Proceed with caution!