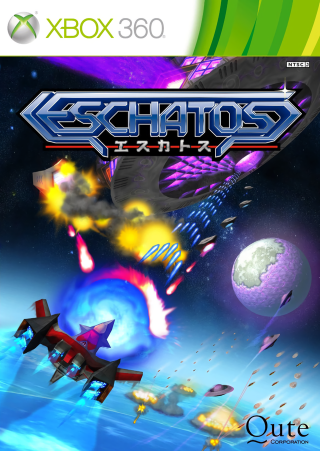 "It's time to take back the Moon!"
Advertisement:

ESCHATOS is a vertically-scrolling shooter developed by Qute Corporation and released on Xbox 360 in 2011. It is the spiritual successor to Judgement Silversword.

Story takes place in the year 21XX, where a mysterious alien force known as "Purple Erosion" has taken over Earth's Moon, using it as their lunar base of operations as they orchestrate their plans of taking over the Earth. Piloting one of the most advanced space fighters around, it's up to you (and a friend) to stop their invasion on Earth, take them on through outer space, and reclaim the Moon from Purple Erosion to stop them once and for all. How, you may ask? By shooting down everything Purple Erosion throws at you!

Like in Judgement Silversword, the game is split into a few dozen areas, with a Boss Battle every several areas, and the player pilots a ship with a Spread Shot, a narrow shot, and a shield. New to this game are the presence of multiple gameplay modes:

Although the original release is Japan-only, it is region-free, so the game can be played on any Xbox 360 regardless of its region code. The game was also bundled with Judgement Silversword and its gaiden game Cardinal Sins, giving players the ability to play its WonderSwan Color spiritual ancestors on a home console. In 2012, Qute released the arrange soundtrack for use with the game in the form of DLC. Another spiritual successor, Ginga Force, was released in February 14th, 2013, followed by a Compilation Rerelease four months later bundled with ESCHATOS and the games' soundtrack.

A PC version of ESCHATOS was published by Degica and released through Steam overseas on September 18, 2015 along with a port of Judgement Silversword, and the arranged soundtrack DLC as well on November 13, 2015.

Another ESCHATOS-JSS-CS bundle was released on Nintendo Switch on November 18, 2021 in Japan to mark the game's 10th anniversary and in North America and Europe on January 13, 2022, with a PlayStation 4 version to come at a later date. It removes the loading times between stages and features the arrange soundtrack as part of the base game, as well as a remastered version of the original soundtrack. Notably, the Japanese version features an English translation.