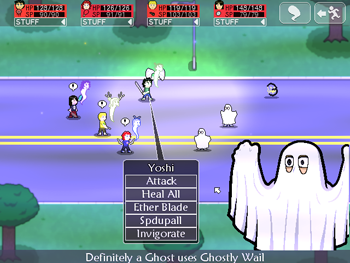 "Just minutes ago, a great evil began to descend upon this town from beyond the grave. With its coming, it has also inadvetently pulled an army of dark spirits back into the living world. Yoshi... you must seek out the source of this disturbance, tonight. We must destroy it before it is fully formed. I fear it will soon be an unstoppable force."

Phantasmaburbia is a commercial console-style RPG developed by Greg Lobanov as the spiritual successor to Dubloon.

The game takes place in a small suburban community known as Owl Creek, where four teenagers find themselves in the middle of a mass haunting; ghosts are showing up all over the neighborhood as a result of some dark force's efforts to enter the human world. With the help of their own personal Spirit Advisors, they set out to save their home.

The game boasts vastly improved visuals compared to its predecessor, including fully-animated battles, new lighting and particle effects and a sleek, streamlined interface. The mouse-based controls and Action Command-based battles return from Dubloon, but the battle item system has been scrapped in favor of new finisher moves, which can be stacked to perform Combination Attacks.