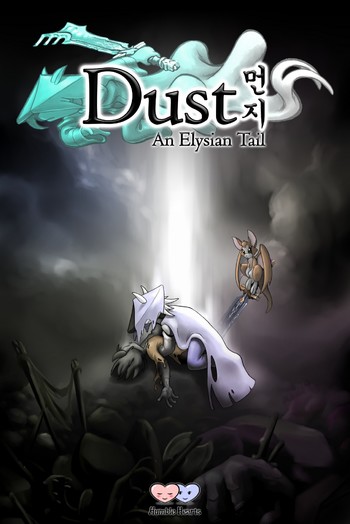 Dust: An Elysian Tail is an independently-made, side-scrolling, Metroidvania, action RPG Fantasy game by former Jazz Jackrabbit animator Dean Dodrill (a.k.a. NoogyToad) of Humble Hearts for the Xbox 360, PlayStation 4, Windows, Mac, and Linux PCs, and iOS on the App Store.

The story of the game centers around the eponymous protagonist, Dust, who has no recollection of his past memories. He sets out on a quest to find the answers he's looking for with the ancient Blade of Ahrah in hand, along with the sword's guardian, a nimbat named Fidget, to aid Dust during his quest. Along the way, he must also help various villagers in need of a hero. Eventually, he becomes involved in a conflict with a genocidal dictator who seems to know something about his past...

The core gameplay of Dust: An Elysian Tail is essentially a Metroidvania-styled game where players explore the vast world of Falana, fight various monsters, and gain special abilities to access new areas. Along the way, Dust can gain XP and raise his stats, pick-up raw materials to craft items, and accept side-quests from various villagers. Just don't let the hand-drawn scenery distract you.

The game was first planned as an Xbox LIVE Indie Games title during its early developmental stages, although after the submission of the game at Microsoft's Dream.Build.Play contest at PAX East of 2009, Dean Dodrill won the grand prize of a contract with Microsoft to release the game as an Xbox Live Arcade title at the event. Aside from the game's music (provided by Hyperduck SoundWorks

), voice acting, and parts of the story, the game has been developed entirely by Dean Dodrill himself.

Dust: An Elysian Tail is also part of a series set within the An Elysian Tail universe; the series currently consists of this game and an animated film titled Elysian Tail that is also currently in production. The game was originally released on Xbox LIVE Arcade on August 15th, 2012 as part of the "Summer of Arcade" titles, and has since been released on Windows, Macintosh, Linux (via Steam, GOG, and Humble Bundle), PlayStation 4, iOS, and the Nintendo Switch.

Dean has confirmed that a sequel to the game is in development. But it won't be his next game, as he is working on another project unrelated to Elysian Tail.

For a similar 2D hack'n'slash with heavily stylized and hand-drawn graphics, see Muramasa: The Demon Blade.

The beautiful yet dangerous world of Falana is host to the following tropes: