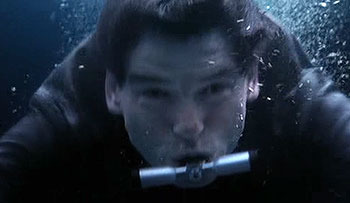 In fiction, characters may for whatever reason need to stay underwater for an extended period of time. In Real Life, this can be accomplished with SCUBA gear for short periods (about 1 hour) or rebreathers for much longer periods — however, these real world devices are bulky, require a lot of training (especially rebreathers), and are priced well beyond many people's means.

Obviously, these concerns would bog down most fantasy or science fiction narratives. The solution? The Artificial Gill: A device that enables a character to swim underwater without worrying about the Oxygen Meter, unless the device runs on air tanks. These are used to find and explore Underwater Ruins and the Underwater City.

See also Super Not-Drowning Skills. The inverse, which allows an aquatic character to handle non-aquatic environments, is a Mobile Fishbowl.