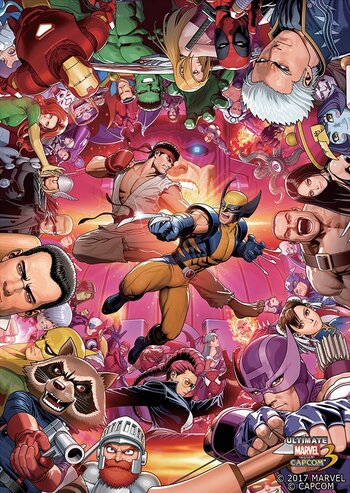 "Welcome to the world of Marvel vs. Capcom 3! The world’s greatest heroes are all here! Lay claim to your glorious victory!"
Advertisement:

After the release of Marvel vs. Capcom 2, Capcom lost the Marvel license and the two companies went their separate ways. Marvel worked with Electronic Arts to create another Marvel-themed fighting game, Marvel Nemesis: Rise of the Imperfects, in 2005. Capcom created more crossover fighting games with SNK, Namco, and even animation giant Tatsunoko Production.

In 2008, after massive fan demand (and the success of Super Street Fighter II Turbo HD Remix), Marvel vs. Capcom 2 was re-released for Xbox LIVE Arcade and the Play Station Network — this time with online play built-in. Little did anyone know that this (and the arrival of Tatsunoko vs. Capcom worldwide) would be a harbinger for that game's true sequel. More than a decade after the release of MvC2, Marvel vs. Capcom 3: Fate of Two Worlds was released for both the Xbox 360 and the PlayStation 3 in 2011.

MvC3 follows in the footsteps of Street Fighter IV: While characters are rendered in full 3D, gameplay stays in the traditional 2D plane. The plot of the game revolves around Doctor Doom and Albert Wesker assembling a team of villains powerful enough to destroy both the Capcom and Marvel universes, while tapping into energies that cause the worlds to blend — but a greater threat arises from their plans that threatens the fate of two worlds. The roster didn't quite reach the 56 characters of its predecessor, but several old favorites slipped in alongside numerous newcomers to keep up with the popularity of certain characters of the time. The playable characters in "vanilla" MvC3 are:

Capcom later released Ultimate Marvel vs. Capcom 3, which added more fighters to the stacked roster and helped rebalance the current roster (amongst other things). Ultimate also snagged a Play Station Vita release, to boot. The newcomers added to the roster by Ultimate are:

Ultimate also adds 2 special game modes: Galactus Mode (where you use Galactus to fight waves of teams) and Heroes and Heralds Mode (where you collect special enhancement cards as you fight opponents, that are themed with cameos of Marvel and Capcom characters and enhance your combat abilities such as increasing your speed or making you gain more Hyper meter).

At the 2016 PlayStation Experience, it was announced that a port of Ultimate was coming to PlayStation 4 the same day, with further releases for Xbox One and PC released on March 7, 2017. At the same event, a fourth MvC installment, Marvel vs. Capcom: Infinite, would also be announced.