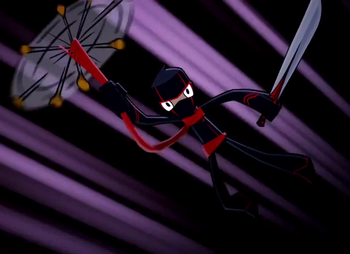 The staff wielding Kung-Fu monk follows his Ninja enemy, but suddenly they stand in front of a cliff. The Ninja pulls out some type of parachute and jumps down and our monk is not Made of Iron or at least not enough to shrug off the fall. What is he to do? Add spinning of course! By spinning his staff above his head he'll generate the uplift needed to gently glide down the cliff or, if he is strong enough even to levitate or fly!

Basically this is whenever a character spins something above his or her head to slow a fall or even hover or fly. This trope excludes anything made to be used like that, since that would just be a flying machine with an odd look or functionality. The same goes for MacGyvering something, since that just constitutes a weird, but still made for that purpose flying machine.

Sub-Trope of Spectacular Spinning; Super-Trope to Heli-Critter and Helicopter Hair. See also Spin to Deflect Stuff for a variant usage of the spinning staff.

Contrast Helicopter Blender, where there is improvisation with an actual helicopter.

Kung Fury spins a mook's arm into a makeshift propeller.

Kung Fury spins a mook's arm into a makeshift propeller.