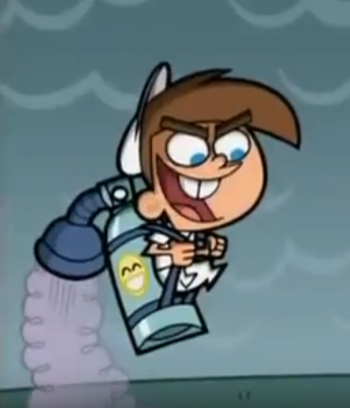 Jet Packs are considered to be pretty cool and a handy way to get around. However real jet packs aren't made for public use yet and takes lots of training to be able to use one correctly. But that doesn't stop people from finding a way around this. They are able to use certain objects like shaken up carbonated drinks, leaf blowers or air tanks to mimic their very own crude version of a jet pack, even if only for a few seconds.

Super-Trope of Not Quite Flight. May also be created from MacGyvering and/or Bamboo Technology. Compare Improvised Microgravity Maneuvering and Gas-Cylinder Rocket. See also Recoil Boost. Sometimes the Soda Can Shakeup can be used as fuel.