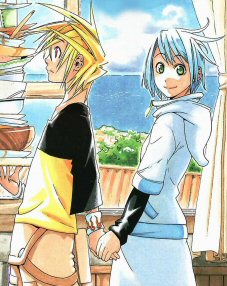 The world has been decimated by a mysterious plague. There is no permanent cure. Only those resistant to it, called "Sisters", can treat it by absorbing the toxins created by the disease. They may save the person, but this shortens their lifespan drastically — once they absorb a certain amount, they die.

The story follows one of these Sisters, Elraine, who is coming to the end of her 'career'. After treating a patient, she is hit with the final, terminal stage of the disease and collapses in an alleyway. Just before she hits the ground, she's caught by a mysterious boy... and the symptoms cease. She's still alive. Once he lets go of her hand, though, it starts up again. What is this boy's power?

It turns out that this boy, Kili, is the one her organization have been looking for — a truly immune person from which they can derive a cure. Until they reach the headquarters, though, she has to keep a hold of his hand no matter what. Standing in the way of this is their inherent embarrassment at having to do everything together (showering, sleeping, going to the toilet, eating). Oh, and the order of assassins that is targeting Sisters...

A fun series that was tragically Cut Short after laying down the foundations of its main arc plot. What made its cancellation so heartbreaking was the amount of foreshadowing set up and Left Hanging. The mangaka Komi Naoshi would go on to write Nisekoi.