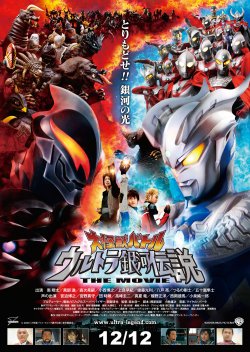 Mega Monster Battle: Ultra Galaxy Legends is 2009 film produced by Tsuburaya Productions and directed by Koichi Sakamoto for Tsuburaya's Ultra Series. It was the first appearance for Ultraman Zero and Ultraman Belial, and was followed by a sequel movie Ultraman Zero: The Revenge of Belial.

Ultraman Belial, a fallen Ultra now fused with Rayblood DNA, has come to the Land of Light seeking revenge. After kicking an entire planet's worth of Ultra asses, he goes on to steal the Plasma Spark, the source of all Ultra's energy. With the planet now frozen, and Ultraman and Ultraseven stuck in human form, is there no-one to stop Belial's ultimate plan of taking over the universe with his Hundred Monster Army?!

...well, yes, there are: Rei, the monster controlling Rayblood/Human hybrid, and Ultraman Zero, an extraordinarily powerful rookie Ultra, said to hold unlimited potential. Ultraman Mebius, who escaped the freeze as he was thrown into orbit, is sent to fetch Rei.