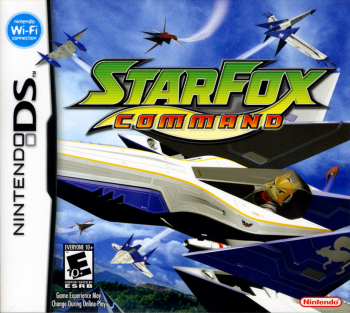 Star Fox Command is the direct sequel to Star Fox: Assault, published on Nintendo DS in 2006. For over a decade, it would be the last ever Star Fox sequel released, until Star Fox 2 in 2017 as a special game for the SNES Classic Edition.
Advertisement:

At the end of the Lylat Wars, the planet Venom was put under strict quarantine. In the years since then, no one has set foot on it. Suddenly, a new military threat known as the Anglars - alien creatures native to the toxic seas on Venom - charged out of the planet's atmosphere, utterly devastating everything in their path and quickly subjugating the entire Lylat system.

After the events of Star Fox: Assault, Star Fox had disbanded. Each member was living a new life, and bringing them back together would be difficult. In addition, Fox had become concerned for Krystal's life, and decided to kick her off of Star Fox for her own protection. She took this very badly, and decided to join Star Wolf and begin a relationship with Panther to make Fox jealous for kicking her out.

Unlike the other games in the series, this game has Multiple Endings that are earned by following different possible story paths.