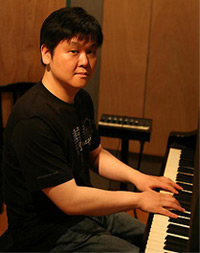 Kenji Ito (born July 5, 1968) is a video game music composer, most well known for composing the vast majority of the SaGa series, as well as some of the World of Mana series and various other games. Most of his work has been for Squaresoft or SquareEnix, but he is now a freelance composer. Ito specializes in a style of music that encourages peaceful relaxation, especially in happy moments. In a game's less happy moments, his music is often known for its wandering, yearning style.