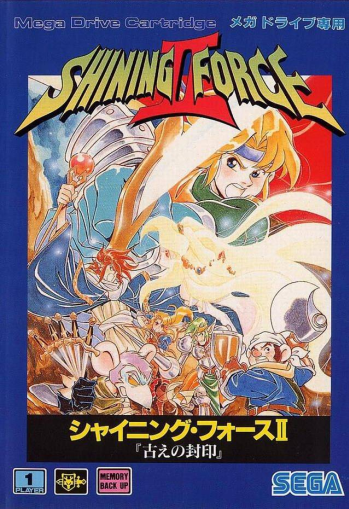 Shining Force II shifts the focus of the first game to the kingdom of Granseal, where an even greater demon lord named Zeon (no relation) is sealed off by two jewels. A thief named Slade steals one of them, and thus breaks the seal on the monster. Zeon possesses the king of the neighboring Galam nation, causing him to do all sorts of freaky Evil Overlord type deeds. This time, schoolkid Bowie and his three friends (Sarah, Chester, and Jaha) form the core of the new Shining Force, and are sent to track down the jewels before Zeon can wreak any further havoc on the world. Takes place in the same world as the first game, although at the time there was only a Continuity Nod to prove it. (This game also suffers from the naming problems of the previous ones, referring to Darksol as Dark Sol, and Lucifer as Dark Dragon, an unrelated enemy from Shining Force I).

The game is much longer than the first, and more free-roaming. There is no chapter system, so the player can return to previously visited parts of the world. There are also two different ways of promoting many characters.

This game was released on the Wii Virtual Console in Europe on October 3, 2008 and in North America on October 6, 2008. The game also appears in Sonic's Ultimate Genesis Collection for Xbox 360 and PlayStation 3, and in Sega Genesis Classics for the PlayStation 4, Nintendo Switch and Steam.