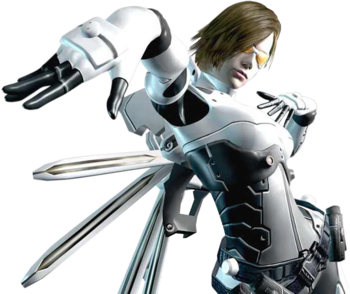 P.N.03 was the only one of two games of the Capcom 5 not later ported to the PlayStation 2, the other being Dead Phoenix, which was cancelled.

The game features cybernetic Action Girl and Third-Person Seductress Vanessa Z. Schneider, who uses palm shots and energy drives combined with acrobatic moves or while standing still gyrating or wiggling her bottom to destroy robots in a range of Apple-chic futuro-minimalist facilities. Impressively, all of her animations were handcrafted.

The game wasn't altogether well-received when it was released on September 9th, 2003 in North America, with most critics and players considering it to be mediocre. Sales were remarkably poor, with less than 30,000 sold worldwide. The below-average reception for a Capcom 5 title was due in no small part due to a difficult development process in which project lead Mikami reportedly had a difficult time caring about it and the team couldn't agree on the "true" title (its development title was Jaguar, reflected by a trailer where she makes catlike movements). The features ended up being as minimalist as the architecture, as due to the extended development cycle many features were dropped. The game engine, some music, and some of the mechanics were later used in Resident Evil 4.

Much of the team later split from Capcom to form PlatinumGames, who developed Vanquish and Bayonetta, games that, respectively, take one of the conflicting directions of this game (Robot fighting third person shooter and kinetic hypersexuality) and made, overall, more satisfying wholes.