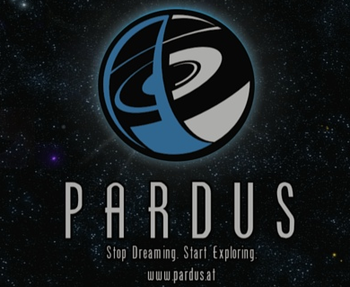 A browser based space MMORPG created by Bayer & Szell OG, set far into the future. Players are all pilots, and are one of 4 races (Humans, Ska'ari, Rashkir, or Keldon) in the game. It's unique in the aspect that although there are 3 backstory-heavy factions (The Empire, The Federation and the Union,) as well as minor ones, ALL politics involved are completely player run, with the developers taking a very hands-off approach to activities that happen in the game.
Advertisement:

The game, being browser based, has not much in the way of graphics(although it did get an overhaul recently, it's still 2d and will remain that way likely forever), however it has a charm to it as it is very much a sandbox game; anything you can do by the game mechanics you can do, and your only opposition will be other players. There are no NPC police anywhere, and 99% of space is PVP open season year round.note There are also safe areas provided by player alliances running their own "police" services.

You can find it at pardus.at

"The 'Cyantology' movement - which consists mainly of unqualified scientists and quack doctors outside of Keldon space - believes to have found the essence of immortality in Keldon brains. They pay good money for their freaky experiments. This highly illegal contraband can not be bought in normal places."