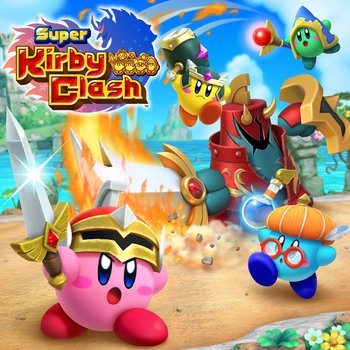 "Long, long ago, in a faraway realm, there was a beautiful, peaceful land called the Dream Kingdom. One surprising day, Hornhead went on a rampage across the Seaside. And so it came to pass that Team Kirby set off on an adventure to restore peace to the kingdom..."
Opening

Super Kirby Clash is a spinoff game from the Kirby video games for the Nintendo Switch. It is the "sequel" of sorts to Team Kirby Clash Deluxe, which, in turn, is the "deluxe" version of the Mini-Game of Kirby: Planet Robobot, Team Kirby Clash. It was released in September 4, 2019 in North America, and September 5, 2019 in Japan and Europe. It is said to be "free to start" - you can download it for free, but it also features microtransactions that will help you with progress in the game.

As in the original Team Kirby Clash, players can assume one of four roles:

Just like Team Kirby Clash (Deluxe), up to 4 players fight various bosses under a time limit and gain experience and Character Levels to increase their abilities. This game features more bosses and difficult challenges compared to the previous game. There are Fragments obtained from bosses that you can use to buy rarer equipment, as well as Gem Apples that you can gain from either completing achievements, harvesting them from the Gem Apple Tree, or purchasing them with real money. The in-game Shoppe now sells new equipment (weapons and armors) that strengthen your fighters, potions that temporarily empower you, new Codexes that give permanent upgrades, Stickers (new to this game) that are used for in-game chat, and Gem Apples.

Quests are now split into two kinds: Story Quest and Party Quest, each with their separate "vigors" that are consumed whenever you go into a stage, and regenerate in certain intervals. Party Quests let you play with friends online, or locally. There's also Adventurer's Bell that can be used to summon a number of Wandering Adventurers to help your quests; it can only be used once per day, but paying with Gem Apples lets you do it more. amiibo is also supported, granting Fragments for scanning various amiibo, and Shrine of Passwords lets you enter passwords (usually given in online events) that gives you Gem Apples and/or Fragments.

The story progression is further expanded from Team Kirby Clash Deluxe: there are now 8 worlds and each world has even more fights, the tougher of which you have to unlock by spending Gem Apples and/or beating the harder "Ordeal" bosses; doing the latter also unlocks new worlds and fights, and lets you purchase better gear.

Tropes occurring in this work