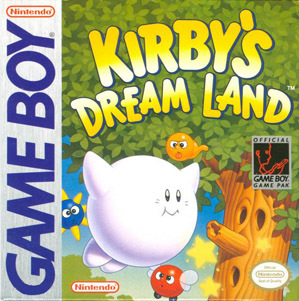 The one that started it all...
Kirby's Dream Land (known as Hoshi no Kirby in Japanese, meaning "Kirby of the Stars") is a 1992 Game Boy game developed by Nintendo subsidiary HAL Laboratory. It is the first game of the Kirby series. The story is simple: The gluttonous King Dedede and his minions have stolen all of Dream Land's food and the Sparkling Stars used to harvest it, so Kirby sets off to right these wrongdoings and get the food back.
Advertisement:

Created and directed by a young HAL employee named Masahiro Sakurai (he was just 19 when he came up with the Kirby character), the game was deliberately designed to be short and easy to allow younger kids to get into video games without having to contend with the high difficulty that Nintendo titles were infamous for. A hidden "Extra Game" mode was also included to ramp up the difficulty for more experienced players. The venture proved to be a success, sparking the growth of one of HAL's most famous franchises.