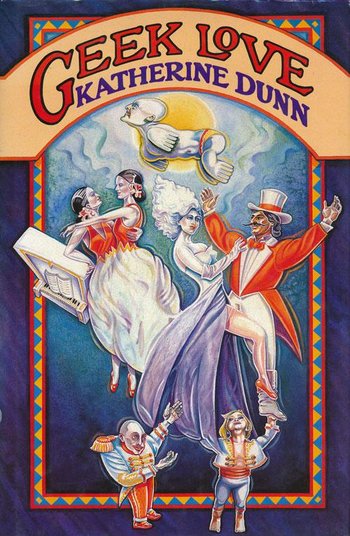 Olympia Binewski did not grow up like other girls. For one, her parents were the owners of a traveling carnival. Lil and Al Binewski came up with a scheme to breed their own freak show, experimenting with a cocktail of drugs to create their perfect children. There's Oly herself, an albino hunchback dwarf; her brother Arty, who has flippers instead of human limbs and a sociopathic personality; her sisters Elly and Iphy, who are Conjoined Twins, and the youngest, Chick, who appears outwardly normal but has strange telepathic powers.

Then things start to get downright disturbing. Very disturbing. Suffice it to say, this is not a book for anyone except those with the strongest of stomachs.

Geek Love, written by Katherine Dunn, is a somewhat obscure book probably due to its polarizing effect with critics, who have called it either brilliant or repulsive and disgusting. Tim Burton has expressed a desire to adapt it for the screen, but whether or not that will ever happen is still up in the air.

Has a Character Page

The Novel Contains Examples of: