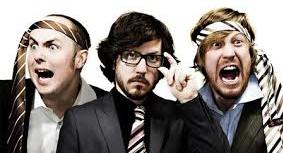 "We're going to have a FLATSHARE SLAMDOWN!"

—Intro to each episode

is a comedy Panel Show podcast created by and starring British sketch troupe Pappy's. Matthew Crosby takes on the role as host/landlord, and the two team captains/tenants are Tom Parry and Ben Clark. Each team has a guest contestant/house guest.

The premise of each episode is introduced in an opening sketch. Matthew, Tom, and Ben share a flat, but a problem arises which neither Tom nor Ben will take responsibility for. Matthew then forces them to play Flatshare Slamdown with their house guests, and the losing team is tasked with fixing the problem.

The podcast was first published in 2011. There have been 5 series, and 5 specials. From 2016 onwards, a new episode is due to be released on the first of each month.

The podcast's rounds are: