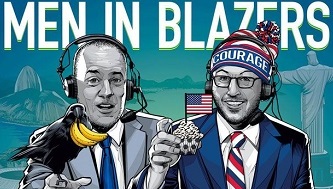 LEFT TO RIGHT: Michael Davies, The Raven and tiny Brazilian bananas, Roger Bennett, and courage.
"Soccer is America’s Sport of the Future. As it has been since 1972."
—Practically the Men in Blazers philosophy
Advertisement:

Men in Blazers is the combined creation of Michael Davies (born March 3rd 1966) and Roger Bennett (born September 19th 1970) — two British men that live in New York, who hope to spread the English footballing culture all over the United States. They have a weekly podcast

They mostly talk about international teams from Association Football outside of America, but mostly the English Premier League. They were made a household name to some after their coverage of the 2014 Brazil World Cup, and their popularity has increased from there, probably being one of the biggest reasons why soccer is becoming the new football in the country.

Outside of Men in Blazers, the two men are often behind the scenes of TV products. Michael is a TV producer that is responsible for US versions of the British shows Who Wants to Be a Millionaire? and Wife Swap, and Roger is a journalist, documentary producer and narrator, and research author.

But when the two men come together, it’s kind of like Car Talk, but without the cars.