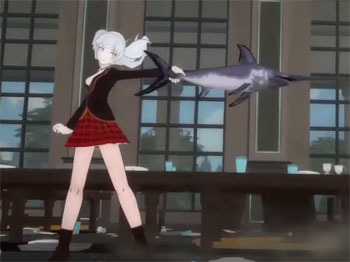 That's what you get when you combine Shamu Fu with swordfighting.
Max: Are you thinking what I'm thinking?
Chief: I dunno, were you thinking "Holy shit! Holy shit! A swordfish almost went through my head"? If so, then yes.
— Get Smart
Advertisement:

Swordfishes, sailfishes, and marlins (aka billfish) are formidable undersea predators that are well-known for their impressive rostrums that look like a threatening Spike Of Doom. They usually use them to knock out prey and slash them, though contrary to popular belief they do not spear them.

Therefore, when billfishes appear in fiction, expect somebody or something getting hurt by these dreadful rostrums. Either the fishes themselves will attack with theirs, or they will be weaponized by someone that will use them as impromptu swords.

Note that there are some other, lesser-known fishes and sea animals that also have rostrums (or similar pointy appendages) were given a similar treatment in some works. Those include sawfishes, which are closely related to stingrays and whose rostrums are serrated or even chainsaws and then there's narwhals, a species of cetaceans whose long, menacing horns are actually a specialized tooth. But still makes them very deadly thanks to their length and sharpness at the tip.

Related to Spikes of Doom. When weaponized by other characters, it is a Sub-Trope of Shamu Fu, Edible Bludgeon and Improvised Weapon. Has nothing to do with The Password Is Always "Swordfish".