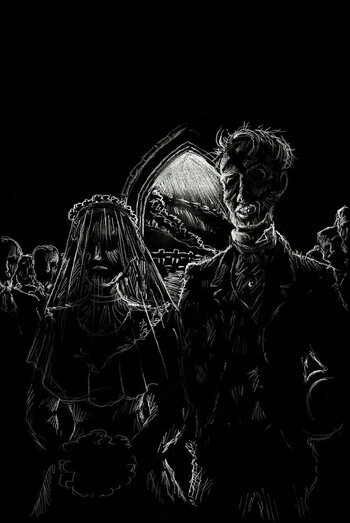 "Alive or dead I mean to be married on Thursday!"
—John Charrington
Advertisement:

"John Charrington's Wedding" is a Short Story from the pen of E. Nesbit. It was originally published in the September 1891 issue of Temple Bar and in 1893 was included by Nesbit in her anthology Grim Tales. Alongside "Man-Size in Marble", "John Charrington's Wedding" is one of Nesbit's two most praised works of horror. It is a retreading of the folktale motif of a corpse returning to claim his bride, told strongly: at a brisk pace, rich in symbolism, and with a good helping of British Humour.

After many proposals, John Charrington convinces May Forster to marry him. He asks his close friend Geoffrey to be his best man. All is set for a perfect ceremony, but two days before the wedding date John hears that his godfather, who lives out of town, is in his dying days. As the man's sole heir, John is obliged to visit despite May's and Geoffrey's belief that he should prioritize his wedding. John does not return the next day, causing disquietude until May and Geoffrey each receive a telegram from John on the morning of the wedding assuring them he'll be on time. Geoffrey is to pick him up at the train station and get him to the church, but John doesn't arrive. Convinced something bad has happened to his friend, Geoffrey rushes to the church to inform the bride only to discover that the wedding already is in progress. The crowd waiting outside with rice and slippers informs Geoffrey that John arrived timely, but looking like death. Geoffrey confirms that for himself when John and May leave the church and goes with May's father to outrun and welcome the wedding carriage when it arrives at the Forsters' home. Despite that they and the coachman know the carriage never stopped, John is no longer inside and May lies dead with a face betraying pure anguish. To add to the dread, an urgent telegram arrives notifying them that John died in an accident while on his way to the train station two hours prior. All the same, there's nothing left to do but make funeral arrangements and May and John are buried together within a week after the wedding.