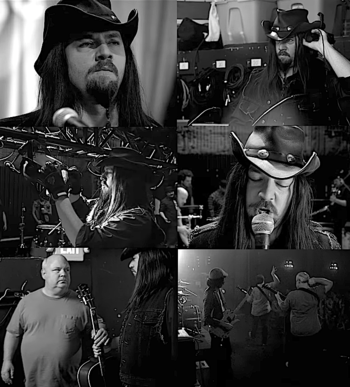 The rockers make it rock, but the roadies make it roll.
"A good roadie knows his whole job is to make someone else look good, keep someone else safe, help someone else do what they were put here to do. A good roadie stays out of the spotlight. If he's doing his job right, you don't even know he's there. Once in a while he might step on stage just to fix a problem, to set something right. But then before you even realize he was there or what he did, he's gone."
— Eddie Riggs, Brütal Legend
Advertisement:

The Rock Star is but a rock. With the help of the roadie, these rocks will be polished and shot through space and become the stars that they were meant to be.

The Roadie is an integral — yet sadly unappreciated — part of the rocking process. Roadies tune guitars, replace lights, check mikes, bounce entrances, drive the bus, cater parties, market merchandise and holds the bass player's hair up as they vomit. The music does not just happen by accident after all.

Because of the various jobs roadies are know to do, they are usually portrayed as the "Hyper-Competent Sidekick" type, managing to fulfill every need no matter how grand. Older roadies are portrayed as sagely, veteran types, having been to every corner of the industry, tasted every drug, known every legend and always having a An Aesop to impart in the process.

Note that stage managers and roadies/stage crew are two different things and never should be confused.