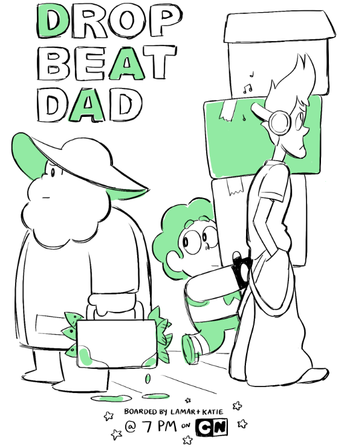 At Onion's house, Steven helps Sour Cream pack up his DJ equipment for a show he has planned for the night. With his enhanced strength, Steven has an easier time lifting Sour Cream's things than Sour Cream himself. Yellowtail arrives and speaks disapprovingly. While we cannot understand what exactly he is saying, Sour Cream understands him and defends himself from his stepdad, arguing that DJ-ing is a viable career, and tells him that he'd rather be a DJ than a fisherman before walking away. Steven, with Sour Cream's equipment, follows him.

Marty steps out and, looking at Greg and his business remarks to 'Starchild' that the music business hasn't been so good for him. He tells Greg that he can "do one" better than paying for a car wash, as he pulls out an envelope and says they have some unfinished business. Sour Cream, returning from the restroom, is surprised to see his dad. He implies they last saw each other nine years ago, to which Marty makes a long explanation about his absence due to the rigors of the music industry.

Sour Cream tells Marty about his DJ rave that he's setting up for. Marty decides to stay in Beach City to make up for the lost time and promote his son's event, showing him his business card which advertises Marty as a 'hype man' and 'promotor'. He is unimpressed at Sour Cream's set-up in the warehouse where he usually performs and decides to move the rave to the beach.

Steven voices his concerns, reminding Marty that when Greg performed on the beach, he did not advertise well, causing nobody (besides Rose Quartz) to attend the concert. Marty admits to making mistakes and being a jerk to Greg in the past but tells Steven and Sour Cream that he has learned a lot about the industry. He then makes a phone call. The scene then changes to a large banner on the water tower that advertises "DJ SC", which impresses Sour Cream. Marty also lends his own equipment to Sour Cream and makes Steven an official roadie. While setting up the equipment, Steven sees Yellowtail on his boat, watching Sour Cream and Marty through binoculars.

On the evening of the rave, a large crowd awaits Sour Cream. Marty insists on building up hype before Sour Cream performs. Marty promotes a type of soda called Guacola by throwing cans into the audience. Things worsen as the audience drinks the Guacacola, only to find the taste terrible. The only person who seems to enjoy the soda is Onion.

While the audience is scared away from the rave, Steven tells Greg and Yellowtail that this is Marty's fault. Yellowtail, furious, storms off on his boat. Meanwhile, Sour Cream confronts Marty, who tells him that the show belongs to him, not Sour Cream, and it becomes clear that this event was simply a scheme for Marty to promote Guacola. Sour Cream yells at Marty, at first in the language used by Yellowtail and Onion, then explains what he said in English: Sour Cream does not need (nor has he ever needed) Marty or Guacola's help for his show. Marty leaves Sour Cream and happens upon Greg and tells Greg that he is only here due to his legal obligation to give Greg an envelope. After handing the envelope to Greg, Marty leaves Beach City.

Sour Cream laments the apparent failure of his rave. He sees Yellowtail rushing towards him on a speedboat, which causes him to become more upset, assuming that Yellowtail was just waiting for something to go wrong so he could force Sour Cream to fish. Surprisingly, Yellowtail gives Sour Cream his DJ gear and tells him to play. Sour Cream thanks his stepdad, and Steven is happy to help set up Sour Cream's rave. The rave attracts a decent crowd, including Sour Cream's family, friends, and a few others. Greg remarks that the music business can be tricky. As he opens his envelope, he says that Sour Cream doing what makes him happy is what matters. He waves away the importance of money but stops when he sees the ten million dollar check within the envelope.