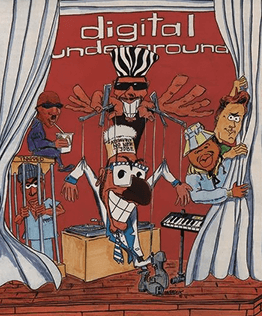 An Alternative Hip Hop group from Oakland, California, Digital Underground began in 1987 as a Political Rap group, with an image intended to pay tribute to the Black Panthers. One year later, Public Enemy released their second album, It Takes a Nation of Millions to Hold Us Back, to a huge amount of critical acclaim and commercial success, which led Digital Underground to abandon its original political ambitions and become a humor-laden Parliament/Funkadelic-inspired group, with leader Shock G often seen with novelty Groucho Marx glasses.

Digital Underground is best known for "The Humpty Dance", performed by Shock G's alter-ego, Humpty Hump (a Loveable Sex Maniac who looks like a cross between a pimp and Groucho Marx), in which Humpty raps about having sex in a Burger King bathroomnote the "Burger King" part is usually bleeped out in music video versions of the song, making it sound like he originally said "I once got busy in a motherfuckin' bathroom.", flirts with a fat girl, and says that he looks like MC Hammer on crack. Digital Underground is also recognized for their One-Scene Wonder appearance in Dan Aykroyd's movie Nothing but Trouble. The movie, Aykroyd's music video for the group's tune "Same Song" and the EP This Is an EP Release, featured a then-unknown Tupac Shakur as a member of the group; Tupac would later go on to become one of the most successful Gangsta Rap artists in history, and a defining artist of the 1990s.

Digital Underground disbanded in 2008, after 21 years of touring and releases. The group remains a cult favorite among Alternative Hip Hop fans for their whimsical, lighthearted approach and Funky sound. Any hopes of a reunion someday were put to rest in April 2021, when Shock G suddenly passed away at 57.

"The Humpty Dance" has been sampled (frequently, without credit of any kind) by numerous musicians, including Public Enemy, Ice Cube (in "Jackin' for Beats"), LL Cool J, Spice Girls (yes, really) and Marky Mark. It was also covered by the rap group Wolfpac, and became a Black Sheep Hit for that group, because it was the only track on Wolfpac's album that wasn't grotesque Horrorcore. Because so many people sampled "The Humpty Dance", Digital Underground released a song called "The Humpty Dance Awards" (on their fourth album, The Body Hat Syndrome) as a way to thank many of the artists who sampled it.