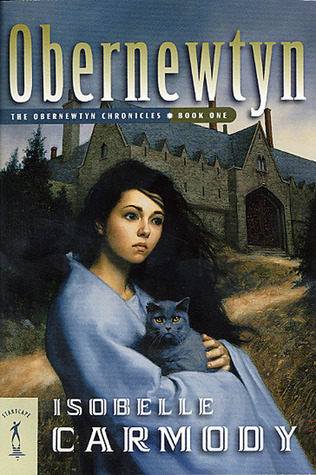 The Obernewtyn Chronicles is an Australian series of speculative fiction novels by Isobelle Carmody set in a world ravaged by a disaster known only as the Great White (presumably a nuclear holocaust). Once the fire stopped raining from the sky, a ruling Council was formed. About the same time, there was a sudden rise in deformed births in both livestock and humans. Afraid of what had just happened, the Council ruled that all mutants, human and animals, should be killed immediately, as would anyone trying to rebel against the Council. They soon founded a new religion, the Herder Faction, which preached the benefits of a natural, puritanical lifestyle and gruesome death to anyone who deviated from the norm.
Advertisement:

The books follow the adventures of Elspeth Gordie, a teenage girl in an orphanage for the children of executed criminals. After establishing the mood of the world, the mysterious Madam Vega arrives. She quickly finds Elspeth's secret: she's telepathic, which makes her a Misfit, who are normally used as slave labor on remote concentration camps Councilfarms. Instead, Elspeth is sent to Obernewtyn, to be part of a research project to 'heal' these Misfits.

The series falls smack dab in the middle of Science Fantasy, with what is fairly obviously a nuclear apocalypse in the backstory and more than a few Beforetimes machines being essential to the plot, yet the Psychic Powers and attitude are given a strong fantasy interpretation. Similarly, the tone is very dark, but hard work does occasionally pay off.

There are seven books in the series: