Film / The Man with the Golden Arm 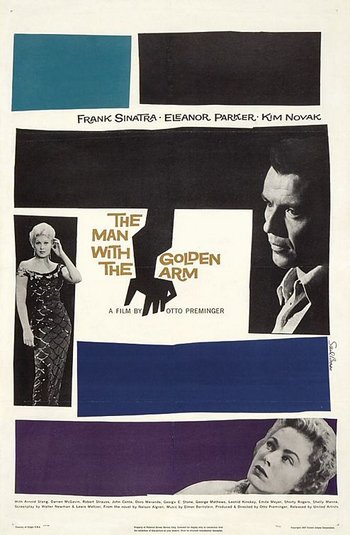 The Man with the Golden Arm is a 1955 Film Noir drama directed by Otto Preminger and starring Frank Sinatra. It's a fairly loose adaptation of the 1949 novel of the same name by Nelson Algren.

Frankie Machine (Sinatra) is a card dealer and drug addict on Chicago's North Side. (The drug—morphine in the novel—is never actually named in the film, but by all indications, it's heroin.) Frankie has just been released from a six-month stint on a Kentucky prison farm, and, having gotten clean, is looking to start a new life as a drummer in a jazz band. However, Zero Schwiefka (Robert Strauss), who organizes the illegal poker games that Frankie used to deal for, wants him back in the fold.

Frankie doesn't want to deal cards anymore, as that was a trigger for his heroin habit, but his needy wife Zosh (Eleanor Parker), who is in a wheelchair after Frankie crashed their car while driving drunk, wants the easy money. Frankie's old girlfriend Molly (Kim Novak), by contrast, is much more supportive of his hopes to go straight.

Schweifka winds up getting Frankie chucked in jail for shoplifting, and after bailing Frankie out, gets Frankie to go back to dealing cards. Zosh—who has a dark secret of her own—badgers Frankie and hassles him about money, and discourages him from making something of himself as a drummer. Meanwhile, local drug dealer Louie Fomorowski (Darren McGavin) keeps trying to get him hooked once more. Finally Frankie cracks under the strain and starts using again. Tragedy ensues.

While drug use had been used for comedy as far back as 1916 and The Mystery of the Leaping Fish, and marijuana was demonized in the 1930s by ridiculous B-movies like Reefer Madness, this film was one of the first Hollywood productions to deal with drug addiction in a serious manner.

Elmer Bernstein did the music, which is considered one of the all-time best uses of Jazz in a film score, with several notable players among the ensemble.